I Had Downtime Today. Here's What I'm Doing About It.

I screwed up in a major way yesterday evening. This post is part of my attempt to fix it.

I quickly restarted the Delayed::Job workers then logged into the Rails console to check how many jobs had piled up. Six thousand.  Oof.  Most of them were low priority tasks (e.g. pinging the Mixpanel server with stats updates, which I do asynchronously to avoid having a failure there affect my users), but sixty users were affected — their print jobs were delayed.  Print jobs normally take under five seconds to execute and are checked with a bit of AJAX magic which polls the server until the job is ready, which means that most of these users probably got an animated GIF spinner to look at until they got tired and closed the web page.  The worst affected jobs took over twelve hours.

Happily, the downtime hit on a Saturday, which is the lightest day of the week for me.  If this had happened a week ago right before Valentine’s Day over 5,000 users would have been affected.

I used the Rails console to create a list of users affected by this, and have sent individual apology emails to the 2 paying customers affected (including attachments for the cards they had tried to print).  I will be contacting the trial users in a more scalable fashion.  Since I don’t have permission to email free trial users (the anti-spam guarantee I give is fairly strict), I dropped the development I had planned for this morning and built a simple messaging system into the site (~20 lines of code — I love you, Rails).  It gives me one-way “drop a message directly to your dashboard” functionality. 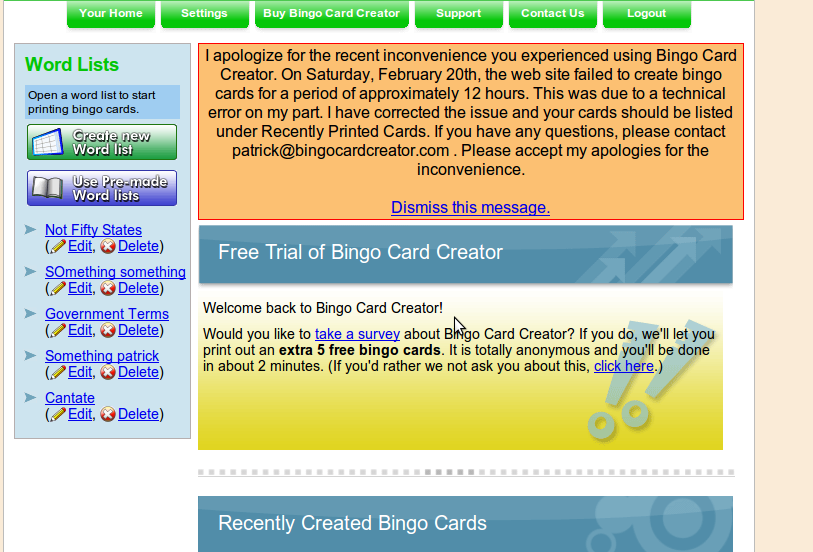 I prefer using this feature to the standard industry responses to outages:

It allows me to apologize directly to affected users, makes minimal demands on their attention while still almost certainly reaching them, and does not cause any issue for the other 25,000 users.  Plus I can re-use this feature later in the event of needing to contact specific users without needing to email them (one obvious candidate would be plopping something straight on the screens of anonymous guests if I found something they individually needed to know, for example, if one of my automated processes caught that a recent print job of theirs did not come out right).

Preventing It From Happening Again

I’m something of a fan of Toyota’s Five Whys methodology for investigating issues like this.  (It has recently been popular with the lean startup crew.  My coworkers at the day job enjoyed some mostly justifiable smirks when I told them that.)

In the course of investigating this I discovered the update to Koala also killed Memcached on the server.  (Thankfully, Memcachedb — where I persist long-term user data that for whatever reason isn’t in the database, such as A/B testing participation data — is on another server.)  Unbeknownst to me, my use of memcached fails totally silently: if Rails can’t find the data in the cache it just regenerates it.  That would have had very unpleasant consequences for users if it had continued until Monday, and none of my automated tests would have picked up on it, because they all ignore timing.  I’ve added an explicit check to see if memcached is up and running.  I’ll also look into doing something about monitoring response times.

What I Learned From Japanese Engineering

I’m indebted to my day job for teaching me both a) how to do this and b) the absolute necessity of doing it, in spite of my longtime cavalierness with software testing. It was quite a culture shock for me the first time I logged into the test server at work to deploy something and got a rap on the knuckles for not:

That’s what we do for the test server.

All of the writing, test suites, automated test processes, and monitoring takes some time to set up and much of it generates additional overhead on all your tasks.  However, in the last three years, I’ve come to recognize that it is a net time-savings over writing apology letters and doing emergency incident response, neither of which are ever fun or quick.

Back in August I released A/Bingo, an MIT-licensed OSS Rails A/B testing framework.  I have been using it continuously on Bingo Card Creator, and judging from the support requests I’ve been getting it has gotten some traction in the Rails world.  The 5,000 or so people seeing A/B tests on my site on Valentine’s Day are almost certainly less than 1% of the beneficiaries of the software now. Yay.

Women, Men, And Other Things Done Wrong By Silicon Valley

This post is waaaaaaay outside the usual ambit of my blog, as it is at least arguably political and about cultural norms in Silicon Valley.  (I’m a sometimes visitor and spiritual resident, but I’ve never lived there.)  I’ll be back to software blogging on the weekend if all goes well.