Great, you might benefit from this translation of Financier into Geek.  (P.S. If you haven’t figured out the significance of it originally being written in Financier instead of in Geek, please, think it through.)  I originally wrote it as a comment on Hacker News but somebody asked me to put it somewhere easily findable.  I have elaborated with standard blog post formating and graphs where I thought they helped the explanation:

Why We Care About Angel Investing

One particular type of investor that invests in startups is called an angel investor. An angel investor is often an individual human being who is wealthy, frequently as a consequence of successful entrepreneurship. They invest anywhere from $25,000 to $250,000 or so.

Fundraising is painful, and requires a lot of time and focus from startup founders. To mitigate the pain, it is often structured in terms of “rounds”, where the startup goes out to raise a particular large sum of money all at once. For an angel round, let’s say that could be a million dollars. (n.b. It is trending down, as companies can now be founded for sums of money which would have been laughable a few years ago.)  Clearly we’re going to need to piece together contributions from a few angels here.

Traditionally, one angel has been the “lead” angel, who handles the bulk of the organizational issues for the investors. The rest just sit by their phone and write checks when required. (Slight exaggeration.) Investors are often skittish, and they require social proof to invest in companies, so you often hear them say something like a) they’re not willing to invest in you but b) they are willing to invest in you if everybody else does. This leads to deadlocks as a group of investors, who all would invest in the company if they company were able to raise investment, fail to invest in the company because it cannot raise investment.

Startup founders are, understandably, frustrated by this.

All numbers below this point were chosen for ease of illustration only.  They do not represent typical valuations, round sizes, or percentages of companies purchased by angels.

Traditionally, the company has exactly one pre-money valuation (which is decided solely by negotiation, and bears little if any relation to what disinterested outside observers could perceive about the company). All investors receive slices in the company awarded in direct proportion to the amount of money they invest. Two investors investing the same amount of money receive the same sized slice of the company. This can be written as “they invested at the same valuation.”

The thesis of PG’s essay is that allowing investors to invest at the same valuation is not advantageous to the startup. Instead, by offering a discount to valuation for moving quickly, you can convince investors to commit to the deal early, thus starting the stampede from the hesitant investors who were waiting to see social proof.

This continues a few times. The startup raises money — possibly more money, depending on how much the angels want in — with less hassle for the founders.

What Is A Convertible Note?  Why Do Founders Like Them?

We’ve been talking about just dollars so far, and alluding to control of the company as if it were equity like stocks, but there is a mechanism called “convertible notes” at play here. A convertible note is the result of a torrid affair between a loan and an equity instrument. It looks a bit like Mom and a bit like Dad. Like a loan, it charges interest: typically something fairly modest like 6 to 8%, much less than a credit card.

The tricky thing about convertible notes is that they convert into partial ownership of the company at a defined event, most typically at the next round of VC funding or at the sale of the company. So, instead of the first investor getting $20 = 20% of the company, he loans the company $20 in exchange for a promise like this: “You owe me $20, with interest. Don’t worry about paying me back right now. Instead, next time you raise money or sell the company, we’re going to pretend that I’m either investing with the other guy or selling with you. The portion of the company which I buy or sell will be based on complicated magic to protect both your interests and my interests. If you want to sweeten the deal for me, sweeten the magic.”

Do we understand why this arrangement works for both parties? It incentivizes investors to commit early, which lets startups raise more money with less pain. Because startups are in the driver’s seat, it also lets them avoid collusion among investors (“We decided we’d all invest in you, but we don’t think the company is worth $100. We think it is worth $50. Yeah, that has no basis in objective reality, but objective reality is that your company is worth $0 without the $100 in our collective pockets. What is it going to be? Give up 2/3 of the company, or go broke and get nothing.”)

How Do You Calculate The Equity Value of A Convertible Note?

OK, back to complicated magic. When the company takes outside investment, the convertible notes magically convert into stock, based on:

For example, continuing with our “low numbers make math comprehensible” startup, let’s say it goes on a few months and is then raising a series A round, which basically means “the first time we got money from VCs”. We’ll say the VC and startup negotiate and agree that the company is worth $500 today, the VC is investing $250, ergo the VC gets a third of the company.

How Does A Valuation Cap Work?

We haven’t discussed valuation caps yet. Valuation caps are intended to prevent the startup dragging its feet on raising money, thus building up lots of worth in the company, and then the angel investor getting cheesed. For example, if they had just grown through revenues for a year or two, they might be raising money at a valuation of $1,250. In that case, $20 only buys you 2% of the company (remember, he gets a 20% discount : $20 / (.8 * $1250) = 2%), which the angel investor might think doesn’t adequately compensate him for the risk he took on betting on a small, unproven thing several years before. So we make him a deal: he gets to invest his $20 at the same terms as the VCs do if, and only if, the valuation is less than $750. If it is more than $750, for him and only him, we pretend it was $750 instead. This means that under no circumstances will he walk away with less than $20 / (.8 * $750) = 3.33% of the company, as long as the company goes on to raise further investment. (Obviously, if they fold, he walks away with nothing. Well, technically speaking, with debt owed to him by a company which is bankrupt and likely has no assets to speak of, so essentially nothing.)

Perhaps This Will Be Clearer With A Picture

As you can see from the below graph, a valuation cap essentially gives the angel an artificially higher discount for if the Series A valuation exceeds the valuation cap.  Obviously then, it is in the interest of angels to negotiate as low a cap as possible, and in the interests of founders to negotiate a high cap or no cap at all. According to Paul Graham, this becomes the primary “pricing” mechanism in the new seed financing economy: if a founder wants to reward an angel, they award them with a lower cap.  If they don’t, the angels get a higher cap, or no cap at all.  This kicks discussions of valuations down the road a little bit, and allows you to simultaneously offer the company to multiple angels at multiple “price points”.  That allows you to reward them for non-monetary compensation (mentoring, having a big name, etc) or for early action on the deal. 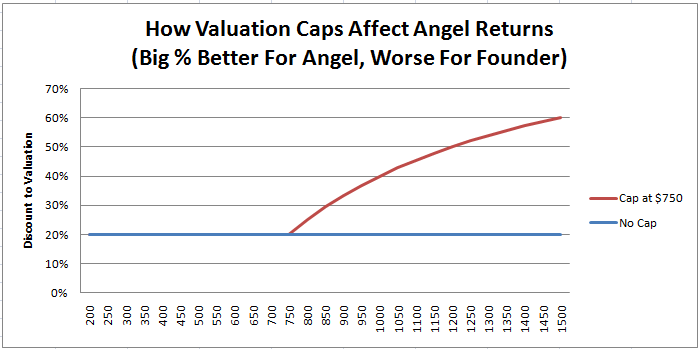 This Is Not My Business. Take With A Grain Of Salt.

Lest anyone get the wrong impression, my familiarity with angel investing is very limited and, to the extent that it exists, it is mostly about angel investing in small town Japan.  (Oh, the stories I can’t tell.)  The above explanation is based on me processing what I’ve read and trying to prove that I understand it by explaining it to other people.  If I have made material errors, please correct me in the comments.

My current business is not seeking funding (and would be an extraordinarily poor candidate for it).  I’ll never say never for the future, but for the present, I rather like getting 100% of the returns.

[Edit: Want to use some or all of this, including the graphs, for your own purposes?  Go ahead.]

The Hardest Adjustment To Self Employment

I apologize in advance for spelling mistakes, because I am writing this on my iPad on the bullet train to Tokyo. Wonderful device, not so great for writing lengthy blog posts like my usual.

Organized, Curated Lists of Best Posts From This Blog

When I started this blog four years ago, I never thought it would be seen by more than a few dozen people, so I never planned any sort of information architecture to it.  500 posts (300,000 words!) and several hundred thousand readers later, it is unwieldy to get to the good stuff unless you have been following along for the last couple of years, or have a week free.  To make this a little less annoying, with the help of an assistant from Hacker News I found the best 72 articles I’ve written, grouped them by category, and for ones which are logically related explained what the connections are (in particular, for the “experiment” / “results” pairs).