I Wrote A Book On Conversion Optimization For Software Companies

Long story short: I wrote a book on conversion optimization, SEO, and related topics, for software companies.  You can buy it here (Kindle, iPad, Nook, PDF) or on Amazon (Kindle).

For the last couple of years, folks have been asking for me to write about A/B testing, conversion optimization, and whatnot in book form.  I’ve never done it, simply because the notion of spending months of work with a publisher to write a book that would (all things being equal) likely fail to earn-out a $5,000 advance seemed to be a silly thing to do just to put “published author” on my resume.  I love writing and I like teaching, don’t get me wrong, but writing as a profession always struck me as work, and not even particularly fun work.

The folks at Hyperink convinced me to give it a try, though.  They are basically trying to make Publishing 2.0 work as a business model: provide authors with design/editing/etc using a workflow which was invented by people who grew up on Google Docs rather than manual typewriters, and create books relevant to niche audiences partially by republishing existing essays and partially by supplementing them with new material.  (The upshot for the authors is that royalties are split more equitably than 93-7-but-with-accounting-practices-that-would-make-the-RIAA-proud.)

Who Should Read This

Luckily, Hyperink Was In Charge Of Design, Not Me

If you’ve followed my blog or products for a while, you’re probably aware that I have the design sense of an addlebrained squirrel who fell into the Christmas eggnog and drowned.  Luckily, Hyperink took care of the book design and typesetting, so that it looks better on your e-reader or screen than anything I would have natively produced.  Here’s a sample (click to enlarge): 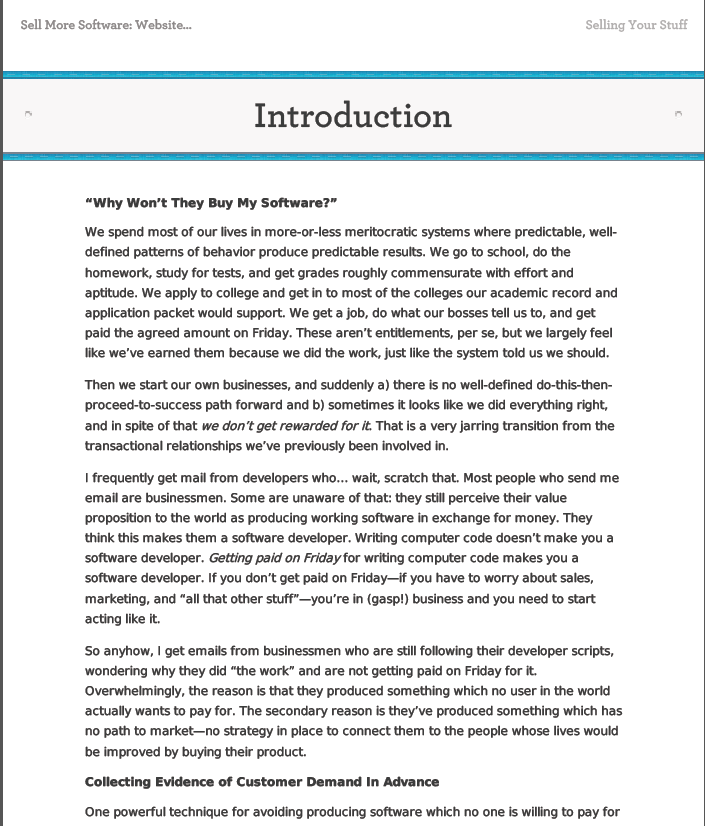 In Which I Explicitly Ask For The Sale

If you generally enjoy my writing and think a curated collection of twenty essays on the topic of making more money for your software business is of interest to you, please buy the book.  (It is, as far as I know, $9.99 everywhere you can buy it, but vagaries of the publishing industry mean that I can’t guarantee that this is true for you.)  If you don’t want to buy it, don’t worry, I won’t think any less of you — enjoy the blog, come back for more next year.  If you buy the book and enjoy it, I’d encourage you to leave a review on Amazon, as folks are really keen on seeing them.

Note to other potential authors: the folks at Hyperink are Good People and were a pleasure to work with in the discussion and editing process.  If you’ve considered trying your hand at writing a book but, like me, thought the traditional publishing industry is largely toxic and exploitative by construction, I’d encourage you to give them a whirl.

P.S. I traditionally post a Year In Review for my businesses, covering what worked and what didn’t as well as statistics, shortly before Christmas.  See, for example, 2011’s edition.  I will do it again this year, but owing to some bookkeeping hold-ups, it will be shortly after Christmas rather than before.  May you and your families have peace, love, and health this Christmas and always.

Keith Perhac and I recorded our 3rd podcast episode with special guest Brennan Dunn.  Listen to it (or read the transcript) for:

Bingo Card Creator (and other stuff) Year in Review 2012

I’m Patrick McKenzie (occasionally better known as patio11). When I started my business six years ago, I was greatly inspired by a few other folks who published the minutiae of their software businesses, particularly actual sales and expenses numbers. I resolved to do it for Bingo Card Creator, my (first) software business, and then just kept up the habit. I traditionally post the year’s numbers and my reflections on what worked and what didn’t right before Christmas: see years 2006, 2007, 2008, 2009, 2010, and 2011.  (This year’s installment was slightly delayed.  Merry belated Christmas?)