Late on Thursday, Apple announced some refinements to their App Store policies. The most important one is about so-called “steering”, which is the practice of letting customers know about out-of-app options for transacting with them. I couldn’t not write about the trifecta of payments, platform strategy, and video games. (Disclaimer: while I work at Stripe, these are my own opinions.)

The bottom line: This is likely to be important for app developers. I think people underappreciate the magnitude of the likely impact due to the incrementality of it. It is not what developers have asked for, which is the ability to pitch users within the app itself on consummating payments out-of-band, but it also is not simply a return to the status quo ante to this summer, when Apple announced it would rigorously enforce guidance against steering transactions off-platform.

To appreciate why, remember that a large share (60% or so) of revenue on the App Store is from games, and game developers are in the business of incentivizing users to take small incremental actions within a play session. Sometimes those incremental actions involve e.g. learning the UI of your princess saving application, sometimes they advance the plot, and sometimes they directly achieve business goals for the developer.

Consider MiHoYo’s Genshin Impact, which I’ll use as an example because I think it is up there with Fortnite or WoW in terms of future expected impact on games industry practices.1 Genshin Impact is an extremely well-implemented gacha game.

Gacha games are named after the onomatopoeia describing vending machines in Japanese malls and arcades which dispense toys and trinkets for, typically, 100 to 200 yen (about $1-$2). The pool of trinkets is displayed prominently on the machine; which trinket you get is effectively randomized. If you had your heart set on a particular one, you might spend much more than $1 on getting it, and some children (and adults!) very much do.

Many very successful games have a monetization strategy which descends from a variant of this. Generally, there is game content (most typically, characters) gated on receiving a random draw within the game. Pulling these random draws is a core game mechanic with many systems supporting it. One can generally purchase draws both with limited free currency, awarded through gameplay (and capped on an absolute or periodic basis), and with a paid currency, which you can purchase with real money.

This is far from the only gaming monetization model, but its an extremely effective one, because it tends to naturally incentivize “whales” (high spenders) to go after the characters whom they most wish to play, and those whales can probabalistically spend surprisingly large amounts of money in small increments2.

OK, let’s go back to rewards systems and how they’re going to be used to modify payments choices.

Do I think Genshin Impact can incentivize out-of-game activities? Yes, I do, and I think they already do it in a way which feels not incredibly off-theme for the game world. Consider this request which one’s constant companion character sent via in-game email. (Truly, every application expands until it can handle email.) 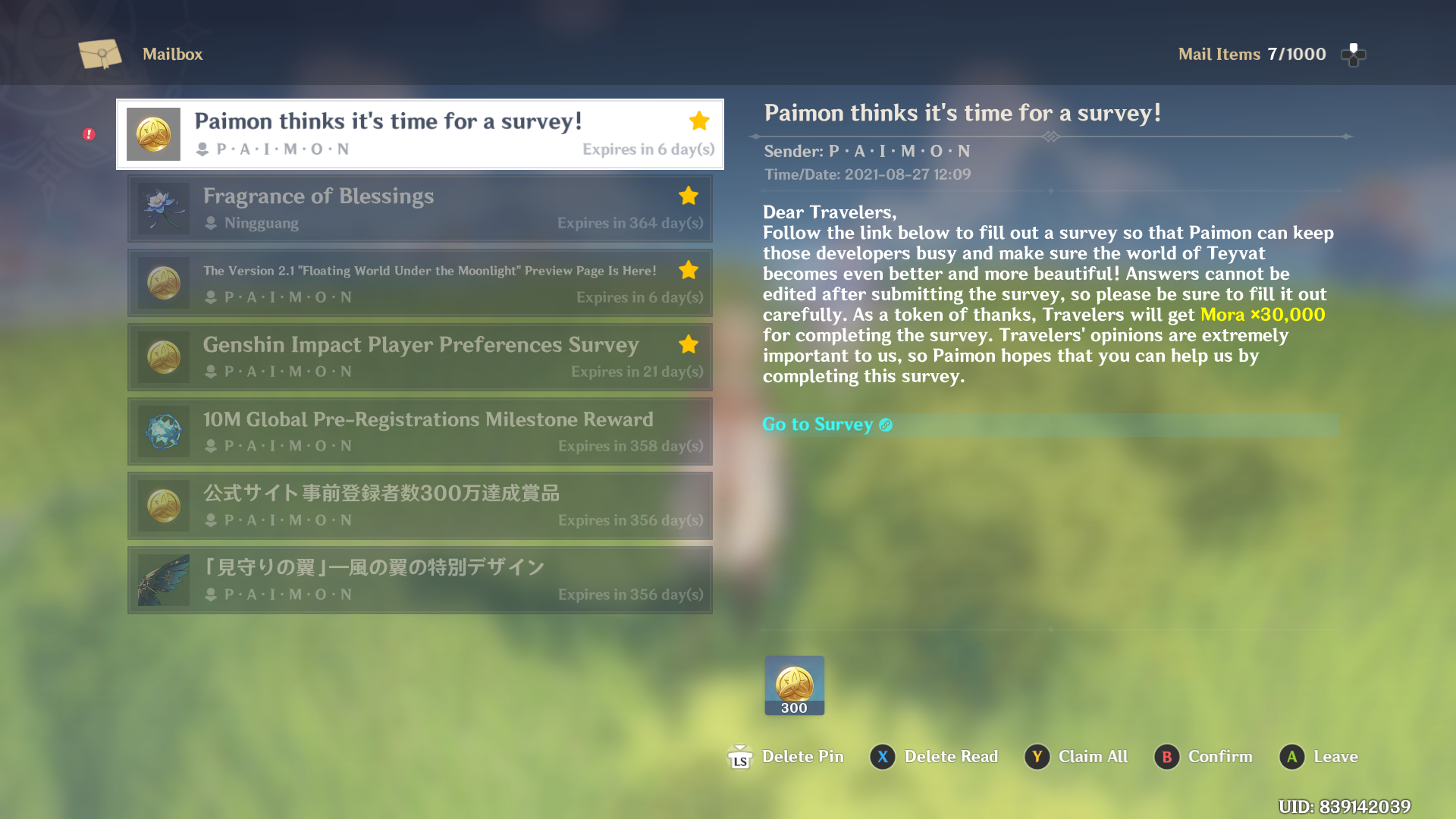 Paimon, a character who directs you to do everything in the game world, is here directing you to take a customer satisfaction survey. Paimon could be employed in a B2B SaaS company’s marketing department, and would be crushing her KPIs, because unlike the typical marketer she has literally infinite gold to incentivize uptake with.

This will inevitably happen to payments, too

The new policy change allows (and, importantly for companies which sensibly have low risk budgets because of platform risk, gives explicit imprimatur to) collecting users’ contact information in-app and then pitching them on payments out-of-app.

It’s trivial to imagine game companies incentivizing different purchasing choices because this is already a core competence. Here’s one of the most A/B tested screens in any free-to-play game: the one which has paid currency purchases spelled out in-app. 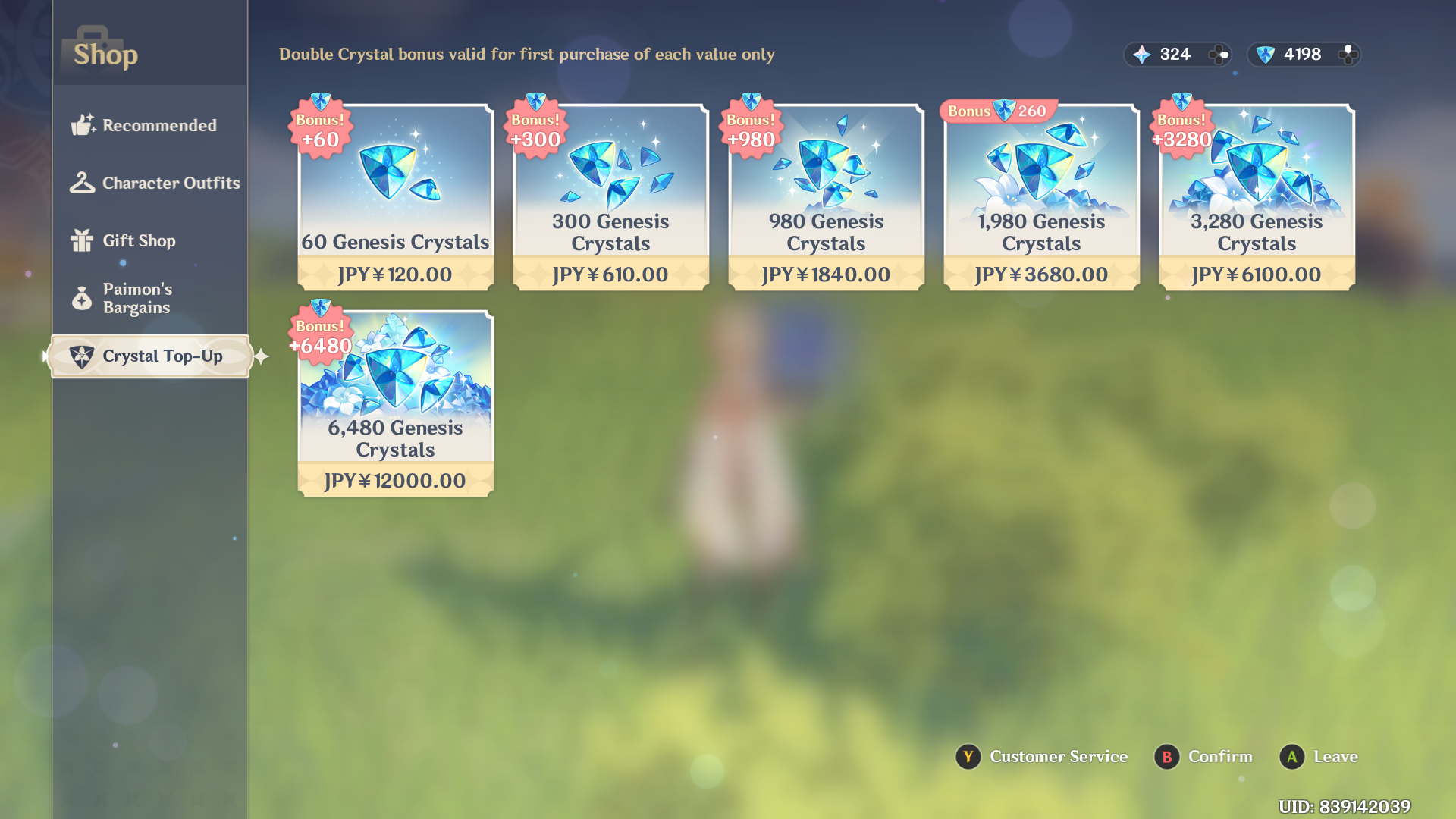 This is from the Windows version of the game, but the iPhone version is identical in presentation and price points. You can see that the team has played heavily with packaging options to get users to commit to paying for the product and pushing them to larger purchases over smaller ones. (Again, there’s an iceberg worth of intellectual effort put in here that this post will elide.)

Under prior prevailing guidance, if one had established one’s account after downloading the game from an app store (as opposed to the open Internet), one might be locked from purchasing the paid currency except through that app store. Similarly, the Playstation version’s currency is locked to only being useful on Playstation consoles (and external currency can’t be used).

Even if you were using an unlocked platform, such as Windows, you’d have little reason to visit the website to purchase. It’s… functional. 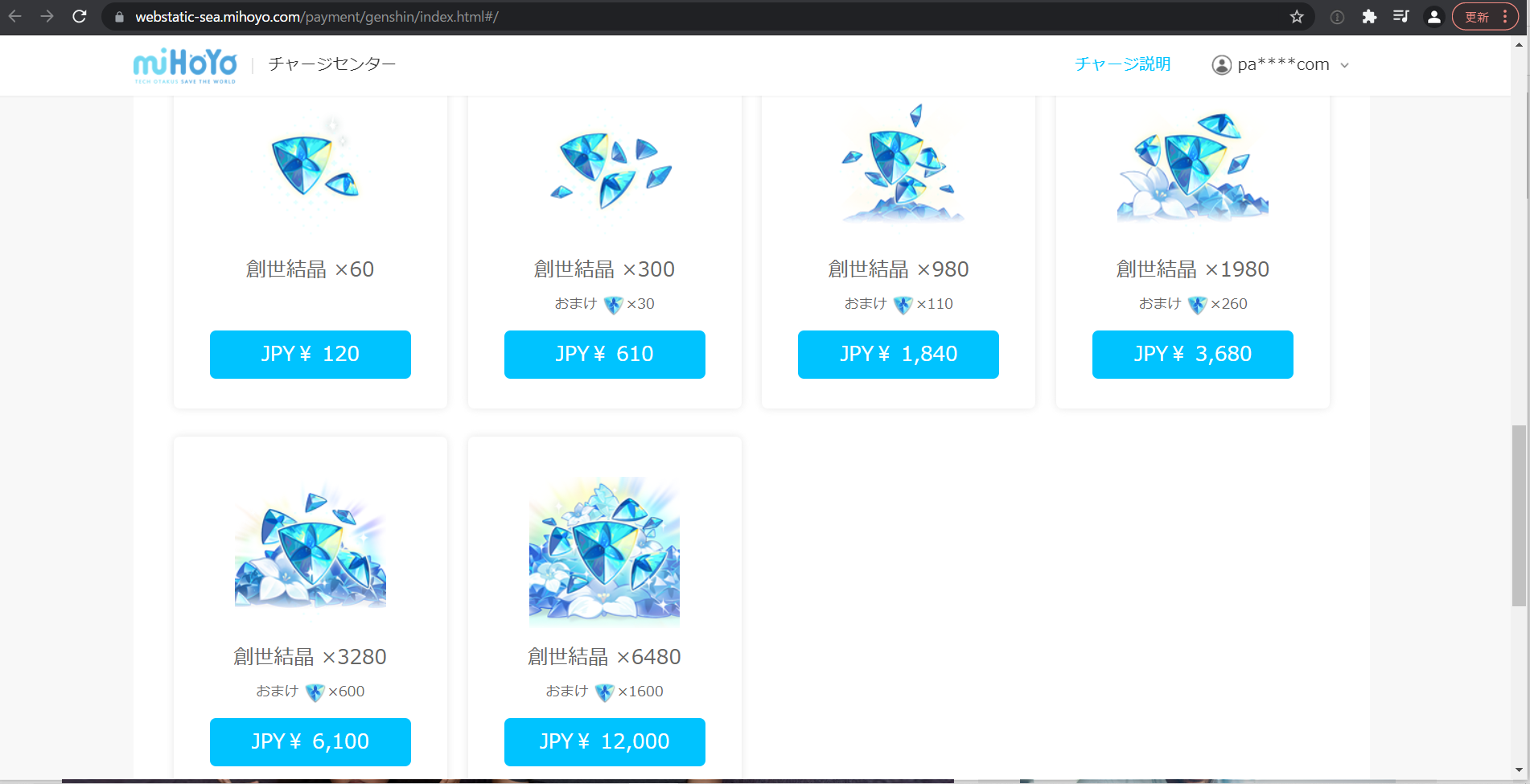 (The implicit cash value of 20 primogems is approximately 25 cents but they’re, of course, free to the Federal Reserve of Primogems. The most work I’ve ever done for 20 primogems? It very literally involves scaling mountains… and I had fun doing it.)

Traveller! I found a coded message from a renowned sage. I can’t make heads or tails of it, but I sent it to your email address.

That email will include an appropriately themed request to go to the newly revamped web purchasing experience for the paid currency. It will have been thoroughly reworked and received some TLC from designers and strategists. And it will, almost inevitably, offer a ~10% discount to the in-app prices for purchases.

This improves the margin on currency purchaes from about 70% to about 85%, at a stroke, which is an incredible 20% lift for one engineering sprint.

Genshin Impact has transacted more than a billion dollars through app stores to date. Imagine that you are the PM of revenue for it. Not implementing this costs millions of dollars per week you delay.

I predict, with over 90% confidence, that games are going to implement experiences like this within 6 weeks. Genshin Impact will almost certainly roll it out by October.

This is available even for games without a gacha model specifically. Games which directly sell skins (cosmetic improvements) can similarly offer a bonus skin if you purchase your next one from their site. Games can “window” content releases; new expansions/levels/characters available direct on Friday and in-app on Sunday. Since launch windows are invariably spikey in games, this has outsized margin impacts even if the price in both places is the same.

Single app developers selling on a more traditional “license” model might not benefit as much, but presumably they’re pretty happy with the conversion rate and distribution afforded by the app stores. It’s mostly service developers who feel, somewhat justifiably, that after getting into a multi-month relationship with a customer they have a relationship and don’t feel like continuing to pay a finder’s fee indefinitely for their custom.

It will be interesting to see whether this affects B2B services as well, which are a much smaller portion of the App Store but which make up a huge amount of revenue transacted on other software platforms. Basecamp was extremely vocally opposed to being unable to sell SaaS accounts and also maintain an app for Hey, their email product, and presumably they’ll likely experiment with ways to convince their users to go direct. Other businesses may choose the same.

It will also be interesting to see spillover effects of this on other ecosystems. Apple is a trendsetter in the industry; Steve Jobs effectively established a Schelling point that owning a customer relationship in digital goods was worth a 30% take rate, and everyone since has either been on that Schelling point or positioned in direct opposition to it. Relatively niche concerns such as whether one can take advantage of their distribution while also marketing to customers gained through it matter quite a bit, as their decisions will likely influence policies at many other ecosystems.

I, for one, am thrilled that there is a vibrant market in different ways to pay and be paid. It is clearly in the best interests of customers and businesses, and platforms ultimately succeed if and only if both sides of their marketplace are successful, so I expect it is (over the long run) positive for platforms as well.

Some might ask whether it is sporting to pay the user to change their transactional behavior. This is, to put it mildly, not unprecedented in payment ecosystems! Payment methods engage in an unending brutal competition for (term-of-art incoming) share of wallet, and the competitive axes include the ergonomics of the payment method, branding, customer perceptions of trust and risk, and also concrete economic inducement to use them. There is an entire subculture devoted to playing rewards cards off each other. Every credit card company has whales, too, and (at least in the U.S.3) they attract and maintain their custom by rebating them a portion of their spend.

VaccinateCA, the non-profit I have been running, expanded nationally to Vaccinate The States. Here’s what we’ve learned in the last 100 days.